I'm an aficionado of vinyl 7" records, not only because of the music but also because many of these records have an outspoken label design.
In my previous entry I showed a selection of labels from my own collection which were all related to some sort of animal. In this entry I will introduce some more animal-themed labels.

Metro-Goldwyn-Mayer is a well-known film studio. The studio's mascot is a real-life lion, which features in MGM's production logo. In fact there were seven different lions between 1917 and the present which played their part in this logo (Slats, Jackie, Telly, Coffee, Tanner, George and Leo).
MGM Records was launched in 1946 by the film studio for the purpose of releasing soundtrack albums, but soon started to release other musical genres. The logo of the record company features a drawn version of the studio's mascot. The yellow label with black print, like the one right below, was in use up till 1959. 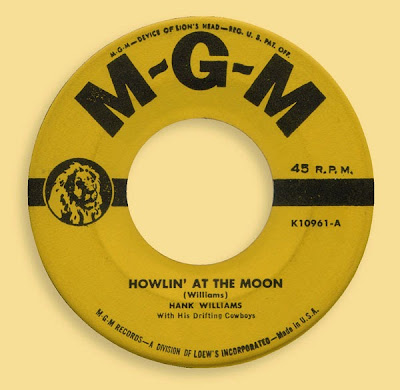 I don't know if you'll agree with me, but I find this label passable, however not spectacular. How much more fun is the 'special disc jockey record', with an alternative version of the logo in comic style! 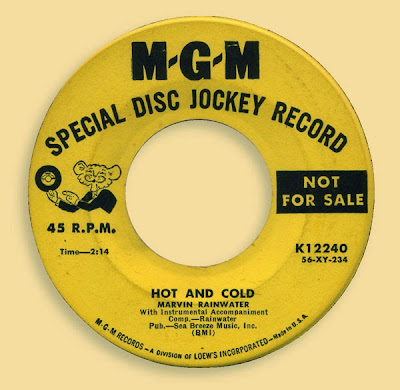 Antler Records was a small label founded in 1956 by Buck Ram, a vocal coach, music publisher arranger and probably most remembered for composing the million selling hits Only You and The Great Pretender for the Platters. I quite like the logo of this label, a beautiful stylized bull's head. I'm a bit puzzled though. An antler might be associated with a deer, a moose or a reindeer, but surely not with a horned bull. 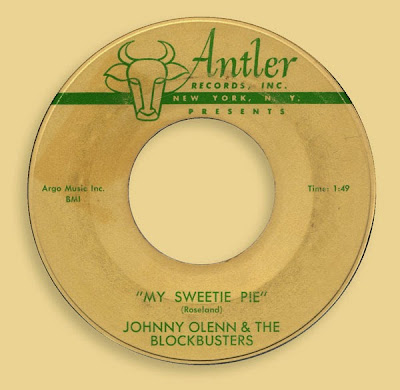 Another stylized logo can be found on the label of Jaguar, an Italian record company that started in Milan in 1963. The label was designed by Mario Moletti, who also designed the label of another Italian record company, Clan Celentano, founded by singer and actor Adriano Celentano.
I don't know if it was the artist's intention to make the jaguar's head a bit reminiscent of Pre-Columbian art, but it's certainly a bonus! 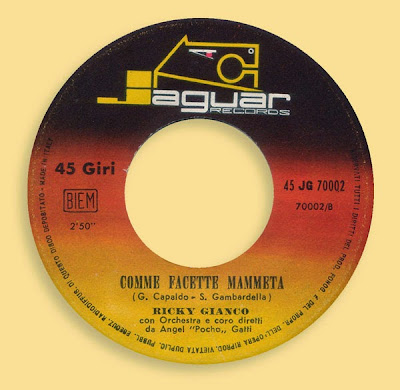 I don't know quite how to interpret the dachshund on the label of End Records (founded 1957). Is it a dachshund cut in half with it's rear put in front? Or is it a very long dachshund that walks around the label, almost catching up with it's own tail? On the other hand, it could just as well be two dogs instead of one. The label as shown was in use between 1959 and 1963. 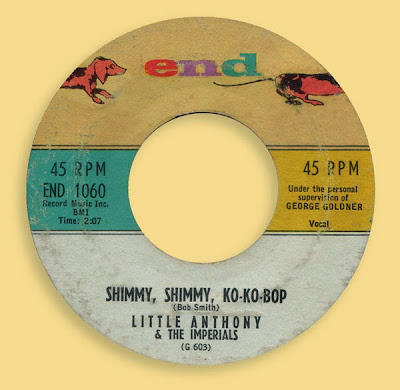 It seems that the record label Scottie - based in Atlanta, Georgia - had a very short lifespan. The discography of this record company only mentions releases from 1959 to 1960.
For obvious reasons the label depicts a Scottish Terrier. The tartan is also quite self-evident. I don't mind that at all. I confess, I'm a sucker for tartans! 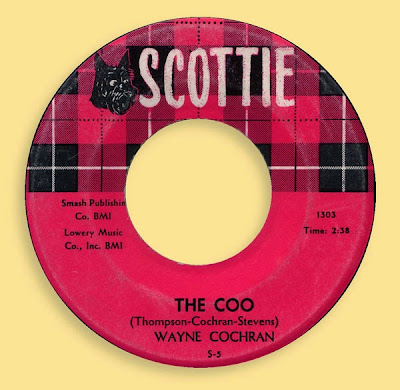 Of all the dogs that ever appeared on a record label, Nipper must be the most famous one. You probably already know the story of Nipper, but that doesn't withhold me from writing it down again.
Nipper (1884-1895) was a terrier owned by Mark Henry Barraud who lived in Bristol, England. When Mr. Barraud died in 1887, his brother Francis, a painter, took care of Nipper. Francis also inherited a phonograph and a number of cylinders with the recorded voice of Nipper's former owner. Francis noted the peculiar interest the dog took in the recorded voice of his late master. Looking into the trumpet of the phonograph with his head cocked slightly, it was as if Nipper was trying to figure out how his master was speaking to him from this strange device. Caught by this image, Francis took up the idea to make a painting of this scene. Francis tried to sell this painting to the Edison-Bell Company, but they weren't interested. However, the Gramophone Company was, provided that Francis would change the phonograph into a gramophone (which played 78 rpm records instead of cylinders).

The Gramophone Company started to use the image of the painting on their company's catalogue in 1899. It was only by 1909 that Nipper appeared on the label of their gramophone records. By then the Gramophone Company had also adopted the name His Master's Voice, which was the name the image of the listening dog was known by. However, Nipper's debut on a record label was in 1902, when the Victor Talking Machine Company acquired the rights for the United States to use him as a trade mark. In 1929 the Radio Corporation of America bought the controlling rights of Victor, after which the company became known as RCA Victor. If you have ever asked yourself "How come Nipper features on both the British His Master's Voice and the American RCA Victor record labels?"...... well, now you know!

Up till now I've only shown 45 rpm record labels, but if one wants to do justice to Nipper's image on a record label, the 78 rpm version of His Master's Voice is the most preferable. I happen to have a few 78 rpm records, so I can show you Nipper at his second best (the best being the original painting of course). 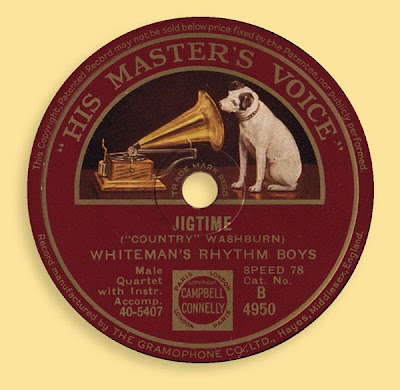 Another reason why I wanted to show you the 78 rpm record label, is because I once made a pastiche of this label. I made this label for a band called The Sound of Music, in which I played drums. The band had no connection at all with the world-famous musical, except for the name (which the band believed was in essence a very suitable name for a band). Nevertheless I couldn't resist the temptation to make some references to this musical, just for the fun of it. There's no particular reason why I made a reference to the label of His Master's Voice. It's just very tempting to make a little jest on such an iconic image. 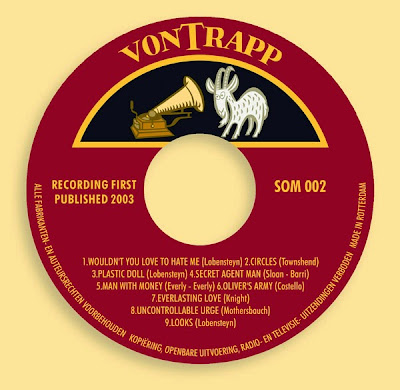 In 2003 I made a label for a demo CD at the request of a friend of mine who plays in a band called Gersch. I was quite pleased to learn he named his fictitious record label Foxrock Records, which gave me the opportunity to depict an animal in the logo. I love to draw animals! 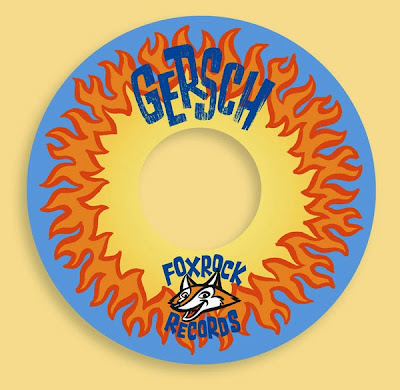 Miss Mary Ann & The Ragtime Wranglers released a Christmas single CD in 2007 for which I made this label. The three reindeers may look identical on first sight, but if you take a closer look you'll notice that they all differ a little bit. No one can accuse me of being a lazy artist! 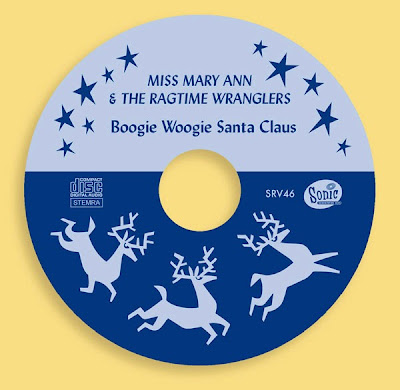 It's possible you're a bit disappointed that I've also displayed labels of my own design in this entry, which are a bit in discord with those beautiful record labels of yesteryear. They're even CD labels, for crying out loud! Why didn't I restrict myself to labelshots of 7" records from the 1950s and 1960s? Well... besides wanting to share my enthusiasm with you for the beauty and witticism of the design of those record labels, I also wanted to show you that they were an inspiration for my own work. From that point of view, it makes sense to add a number of labels of my own design to this entry. So be prepared, dear reader, for you may have to endure some more labels I've made in upcoming entries!
Gepost door Pieter M. Dorrenboom op 07:19 0 reacties