Have you ever heard of a Super-Cocotte? I must admit that, until now, neither did I. Although I'm sure the Super-Cocette will bring back lots of cherished memories for quite a few people, I can honestly say I never came across one in real life.
I bet you're really wondering now what I'm blabbering about . . . . . . let me help you out; a Super-Cocette is a pressure cooker, manufactured by SEB (Société d'Emboutissage de Bourgogne), the company that also published the cookery book "Dit is de goede keuken..." in 1961 (Dutch edition).
I don't know quite how to translate "Dit is de goede keuken" in English. However, SEB also published an English edition, as well as one in French, German, Spanish and Portuguese. So the answer to the correct translation of the title is standing on someone's bookshelf somewhere. 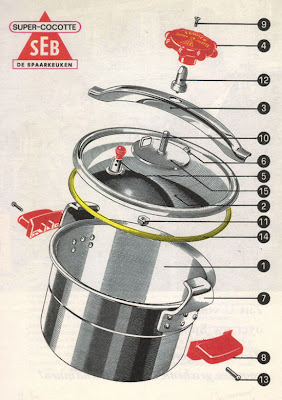 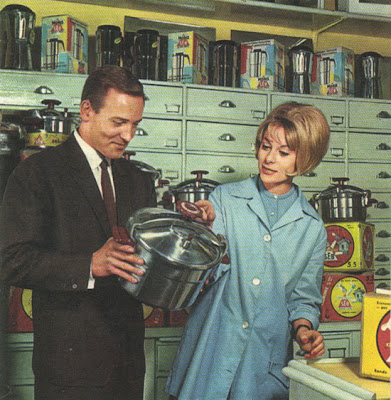 SEB's cookery book has got a lot to offer. It contains detailed instructions how to use the Super-Cocotte, some nice adverts for products manufactured by SEB, some pictures of the SEB factory where the Super-Cocotte is made (one every 12 seconds!) and of course lots and lots of illustrations.
The artists credited for the illustrations are "de Heren Lourdais, Vogel, Niemann van het Volk-Studio te Parijs". Well, that's quite something, three different illustrators! Alas, not any clue is given as to who made which illustration and with no first names or even first name initials given, there's not much to go on to do some research. I couldn't find anything about the Volk-Studio in Paris either.

It's all a bit vague and I think that's a pity, because when I see an illustrator I like, I'm always curious what other work he or she might have done.
Such as the case may be, I guess we have to enjoy these very decorative illustrations just for what they are. Nothing wrong with that, mind you. 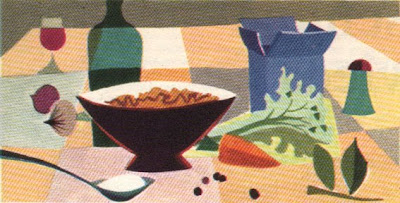 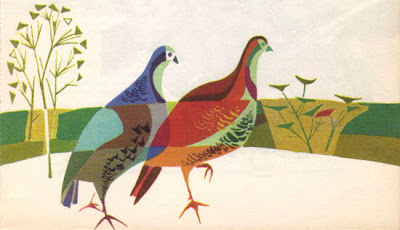 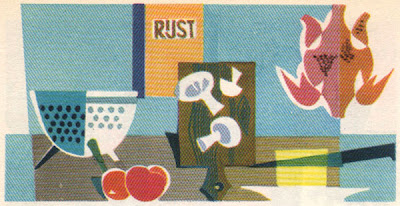 I've also got a second edition of the Super-Cocotte cookery book, published in 1963. Exept for the cover and slightly different photographs, the contents of the book are for the most part the same as the first edition. However, the second edition has some extra illustrations, like the ones here on the left and the right. That's a swell bonus if you like little pieces of artwork like these.
Gepost door Pieter M. Dorrenboom op 02:51 2 reacties