One of my favourite pastimes is to scour flea markets, thrift-, junk- and charity shops. In itself nothing special. I don't think I exaggerate if I would say that millions of people have the same hobby as I do. With all that competition it makes it hard to find anything that's a little bit interesting and somehow it always seems that someone else has the greatest finds instead of me. It's just my envy as I darn well know. Not really a virtue of mine I'm proud of, to say the least.
However, sometimes I do get lucky and find something that I'm really pleased with. Like this set of playing cards I found in a recycle shop last year. 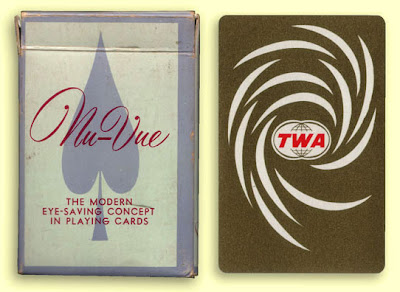 I was immediately attracted by the TWA logo on the back of the pack. I'm very fond of anything connected with airline companies in relation to the mid-twentieth century, you must know. Although the logo of the company is printed on the back of every card, Trans World Airlines is not the manufacturer. These Nu-Vue playing cards, as they are called, were made by Brown & Bigelow, a division of the Standard Packaging Corporation, Minnesota, U.S.A.
Brown & Bigelow licensed the use of the Nu-Vue playing cards to other companies. As far as I could find out, Penguin Cleaners and the Desert Inn and Country Club, Las Vegas also made use of the services of Brown & Bigelow.
It's not easy to find an exact year as to when these cards were first published. The most vague estimation I could find was somewhere in the 1950s - 1970s. The most specific date was 1964, but I'm not sure if that refers to the year of publication of the TWA edition or maybe another company or the real first publication of the Nu-Vue playing cards.

The pictures on the Nu-Vue playing cards are of sheer elegance and nothing like a standard set. The name of the maker of these beautiful designs is nowhere to be found on this product and I think that's a bloody shame! 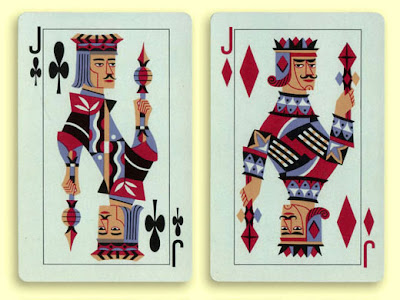 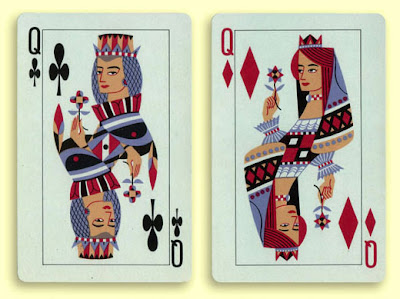 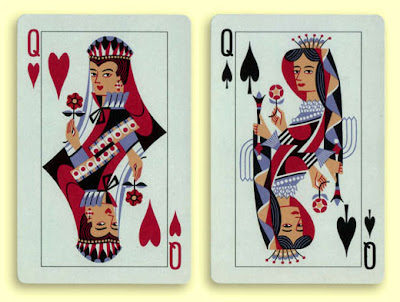 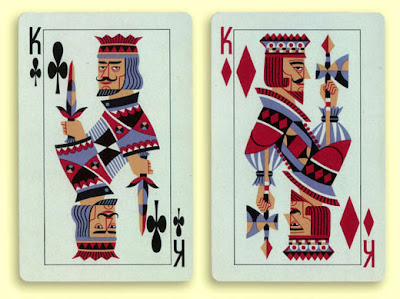 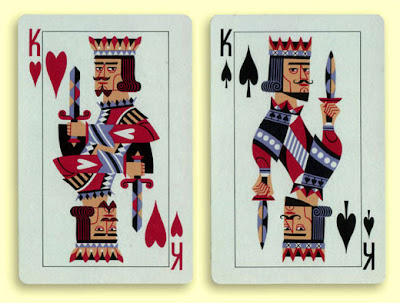 You may have noticed the cryptical slogan on the package in the first picture: "the modern eye-saving concept in playing cards". This sentence may have puzzled you as much as it did me. The pictures on the cards are a bit stretched and compressed, which gives them quite some elegancy, as I have mentioned before. Looking at the ace of spades below, you can see this even more clearly. But what I don't see, is how this can be in any way "eye-saving". I can hardly imagine that stretching and compressing the pictures can result in saving one's eyesight. On the other hand, this might be exactly what Nu-Vue tried to accomplish. I guess the answer to that will always remain a mystery. 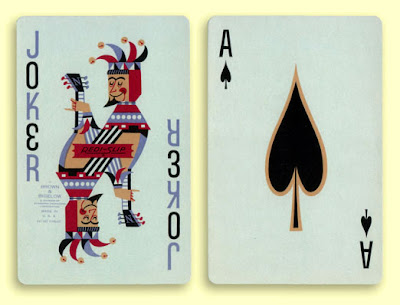 Here's some other puzzling information that can be found on the carton of the Nu-Vue playing cards:

One wonders if it's even possible to make playing cards germ-proofed, but on top of that, what could ever be the use of doing such a thing!?! Germs are almost everywhere! Unless you're intending to play a game of cards in a operating room, I really don't see what good it will do having germ-proofed cards. It all sounds a bit like poppycock to me!
Not that I mind. On the contrary, enigmatical statements such as the eye saving bit and the germs-proof thing makes this set of playing cards ever so much more precious to me!

Back to the pictures on the cards; they were most certainly a source of inspiration to me whilst making a logo for a webshop. Although I did not copy the unknown artist's style to the letter, the influences are obvious.

It seems only right to give the anonymous maker the credits he or she deserves, but most of all I would like to thank Mister, Miss or Mrs. "X" for making the world just a little bit prettier with this beautiful set of playing cards.
Gepost door Pieter M. Dorrenboom op 06:32 4 reacties