The idea of illustrating a children's book has always appealed to me. So you can imagine I was very pleased indeed I was given the opportunity to illustrate the book Kamelenkind (Camel Child), written by Emma van Andel. 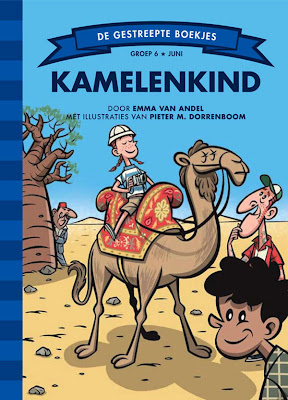 Although illustrating a children's book every month - like Stefan Tijs has to do - might be a little bit too much of a good thing, I've enjoyed illustrating Kamelenkind ever so much. The book is made for children aged nine to ten (classified as Group 6 in the Netherlands). It's rather an adventurous book. The story is about the girl Jen and her father Tattoe (nicknamed that way because of his tattoos) who are leaving for Akkamassa in the Sahara to start up a camel rental company. A very unfortunate business while camel thieves are also hanging about . . . . .
Well, I won't tell too much of the story. I wouldn't like to spoil the fun for those who like to read the book themselves. For that same reason I won't show too many illustrations from the book. Just enough to make you - I hope - curious for more. 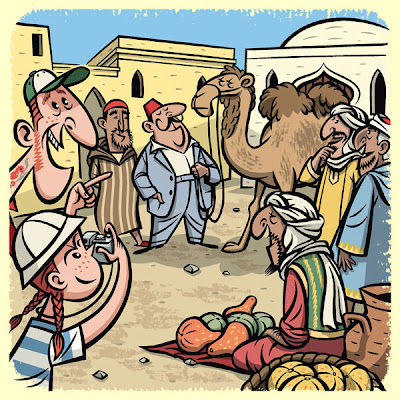 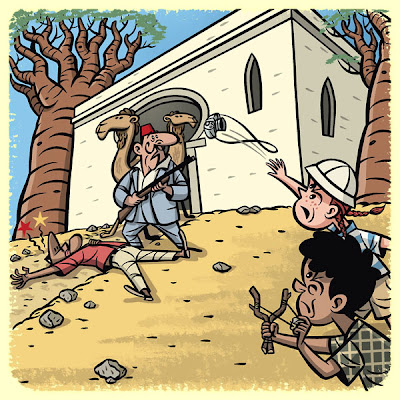 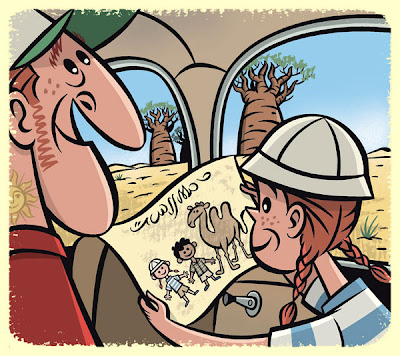 What I would like to do, is to tell you something about the making of the illustrations. Several times I've noticed that some people don't realize how an illustration is made and how much work is involved. One might think that I just take a sheet of white paper, draw some lines on it , add some colour and Bob's your uncle! Or one might even think that all my drawings are made with only the use of a computer (and what could be easier than that?). Nothing of the sort, I can assure you. It may look as if my illustrations are done with much ease, but appearances can be deceptive.

To show you the process of how an illustration is made, I will use the first illustration of the book as an example.
First of all I make a very small and rough sketch, just to see for myself what the main elements of the picture will be and what kind of composition I would like to use. In this particular case the first sketch is the actual size of the illustration that is going to be used in the book. 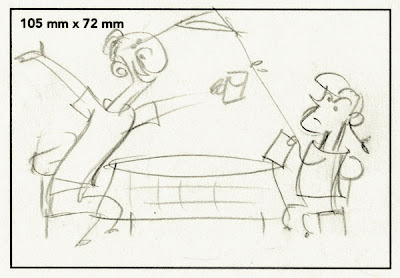 The next sketch is still very rough, but this time I try to fill in some of the details. I haven't figured out yet what the characters will look like. I give it a first attempt, but at this stage it's not the most important thing. This sketch is mainly to figure out what the posture of Jen's father will be. The first chapter of the book mentions the tattoo on his left upper arm. Of all the tattoos on Tattoe's body, this is the only one that is set out in detail. It's a significant tattoo, because it represents the bond between Tattoe, Jen and her mother who died when she was born. However, it's also mentioned that Tattoe enthusiastically spreads his arms when he tells Jen of his camel rental plan. This is the most essential scene in this chapter, but with Tattoe's arms spread out, the tattoo on his left upper arm is out of focus. So I'll have to make a choice. 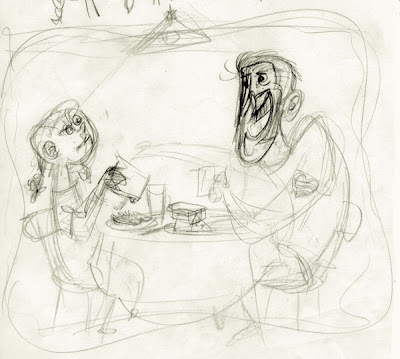 After making this rough sketch in which Tattoe's tattoo is visible, I decide it's better to choose for the other option, because I think the contrast between Tattoe's keenness and Jen's scepticism is ever so characteristic for this chapter.
I also decide to adjust the perspective of the table so it's easier to distinguish the different objects on the breakfast table. 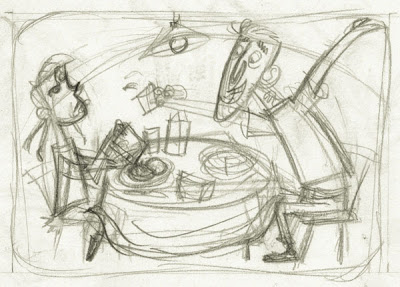 The basic construction is now good enough to be worked out in a more detailed sketch. With the use of a light box I make a mirrored image of the sketch. By doing so, I get a different view on what I've drawn. This way it's easier to spot little slip ups, such as a limb that's longer or shorter than the other one, or an unintentionallly askew face.
I read about this little trick in a book about the life and works of none other than the grandmaster of comics, Hergé. It was many, many years ago that I read this book, but I've been using this trick ever since. If a light box is not at hand, one can also hold the sketch before a mirror or even hold the sketch upside down to achieve the same effect. 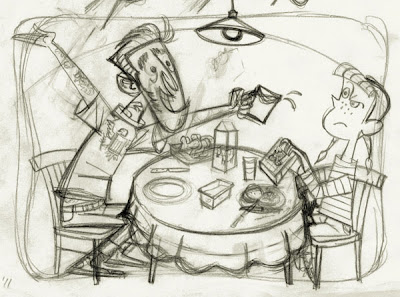 I'm already quite pleased with the looks of Jen. Tattoe however, is not to my liking at all. So for the moment I put this sketch aside and draw my attention to his looks. In attempt to find a visual image suitable for Jen's father, I make quite a few scribbles. Some of those scribbles look rather stupid, don't they? But bare in mind that you've got to draw a lot of wrong lines in order to find the right ones. That's what sketching is all about. 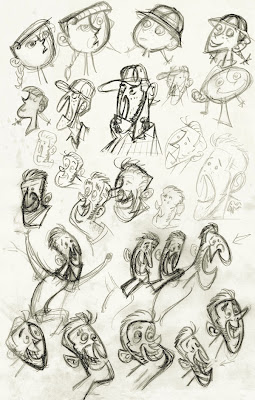 In this sketched search for the right features for Tattoe, I finally find the lines that meet with my approval. Now that I've got more or less figured out what I want the illustration to look like, I can make a final sketch in detail. 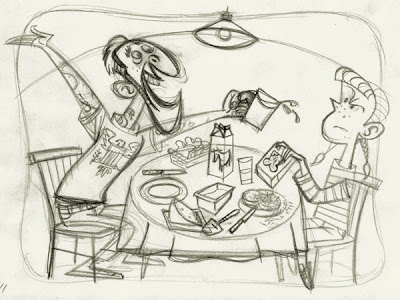 Before I start to ink, I transfer the sketch to paper with a very smooth surface. Ink runs out on paper which hasn't got a smooth surface. Don't like that at all! But a smooth surface only isn't enough. You'll also need a brush with a sharp point in order to get a nice sharp line. I prefer to work with brush and Indian ink. A brush no.2 or no.3 - preferably one made with marten hair - will do the the trick. But Indian ink is quite aggressive and the brush will only last a couple of drawings. By then it has lost too many hairs to draw another decent line. Sometimes I use a brush pen. The point of a brush pen always stays sharp. However, the ink of a brush pen doesn't dry as quickly as Indian ink. It takes up to 24 hours to dry when used on a smooth surface! I always get smudges on my drawing whilst working with a brush pen, because my hand had accidentally touched an already inked part.
Of course all those smudges have to be retouched. I do a lot of retouching anyhow. Although I'm quite experienced with the use of brush and ink, my brush still slips every now and then. Like I wrote before, I like my lines sharp. So sloppy lines won't do at all!
I used to touch up my lines with Schmincke Dekweiss, the only paint that does that job well enough in my experience. But my local art supply dealer doesn't sell that brand anymore and ever since I make use of digital resources, it's just as easy to do the retouching on my computer. 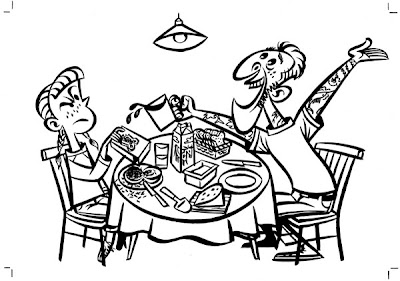 Now that the inking is done, the next step will be to make a scan of the line drawing. There's still some work to be done before I can fill in the colours. I'll have to touch up the lines and I'll have to adjust Tattoe's tattoos, because I don't want black outlines there. The same goes for the cow and clouds on the milk carton. And of course I need a background. For the illustrations of this book I thought it would be nice to have a background with a rough edge. To achieve this effect I use watercolour paper with a very rough surface and a rather dry brush.
With this background and all the adjustments made, I can finally do the colouring of the illustration. 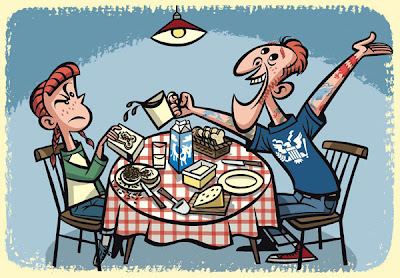 Although not bad for a first attempt, I'm not quite pleased with these colours. The dominant colour blue in this illustration gives it a rather cold feeling. That doesn't seem right. A warm, domesticated feeling seems much more in place for this scene. So I add a little yellow to the colours to give this illustration a little more warmth. 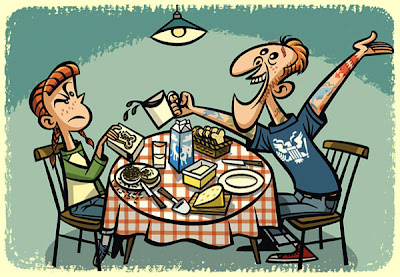 There, that's much better! This is how the illustration is published in Kamelenkind. Well, it took a lot of steps to come to this end result, now didn't it?
Some of you might have identified the - simplified - logo of the Ramones on Tattoe's T-shirt. I don't think that's something that today's children will immediately recognize, but I love to put such clues - or maybe a little homage might even be a better word - in an illustration if the oppurtunity arises. It's not unthinkable at all that some of these youngsters will discover many years from now what the emblem on the T-shirt stands for. Call me a silly old fart if you like, but that thought certainly gives me a little bit of fun.

If you like the illustrations shown in this entry, you might like to know that I've made the illustrations for a second book, also part of De Gestreepte Boekjes series and also written by Emma van Andel. It's called De Bezoekers van Zirk (Visitors from Zirk). I will tell you more about that book a next time.
Gepost door Pieter M. Dorrenboom op 06:30 14 reacties