A little while ago I was asked to make a decorative wall piece for a living room. My principal gave me a free hand in whatever I would like to choose as a subject for this work; a rare opportunity!
I have always been fascinated by the deep sea and its inhabitants. I'm also very fond of mid-century modern decorative art, often applied as murals. I figured it would be a nice idea to combine those two, so I decided to make a depiction of a giant squid using a visual imagery in the spirit of the mid-century modern artists.
To achieve this, I chose to make a collage of coloured paper. I've made such collages before, like this one: 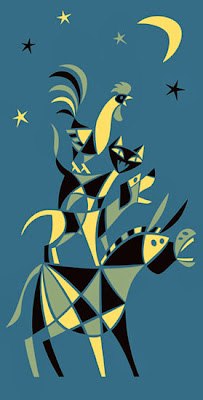 ...and these tropical fish: 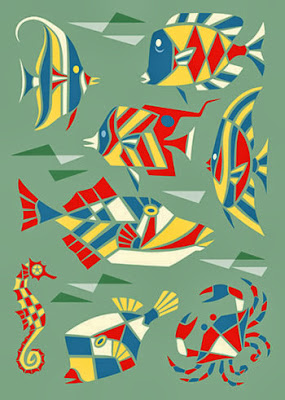 Taking the depiction of the giant squid as an example, here's a step by step explanation of how I make a paper collage:

The first step in creating a new work is always sketching. Well, in my case anyway. After a few attempts trying to find the right shape, this is the result:

The two tentacles of the squid are still a little too short to my liking, so I make them a bit longer. Having made this adjustment, I have to enlarge the sketch, because I'll need a working drawing the same size as the actual paper collage, which will be 65 cm wide and 19 cm high (ca. 25,6" x 7,5").

This working drawing will come in very handy whilst constructing the collage, but first I'll have to make the background. This background consists of two strokes of paper in two shades of blue. 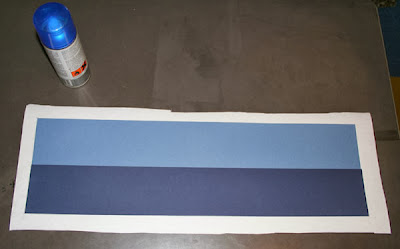 With the use of the working drawing and transfer paper I trace my design onto the background. These chalk lines will help me to paste the cut-out pieces of coloured paper onto their right position. 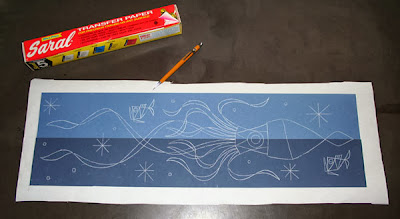 Using the working drawing as a template, the various shaped segments of the design are traced onto different colours of paper. I start with the mantle and head of the giant squid. The basis for this consists of two colours. After cutting the traced segments out of the coloured paper, I glue these parts onto the background, but not before I've erased the white chalk lines that mark the contours of the mantle and head on the background.

Next step will be adding other colours to the body and head of the squid. I trace another segment of the design onto a sheet of coloured paper (yellow this time), cut the shape out of the paper and then glue it on the mantle of the squid.

I don't want too many layers of paper on top of each other. So I use the piece of paper I've just added temporarily as a mould to cut exactly the right shape out of the body of the squid. I use spray mount as an adhesive. That way already pasted segments of paper can be quite easily removed and - if necessary - be repositioned. 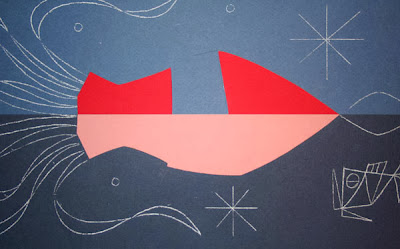 Having removed the piece of yellow paper and the underlying red paper which I've just cut out, I replace the yellow segment which now perfectly fits into the vacant spot. 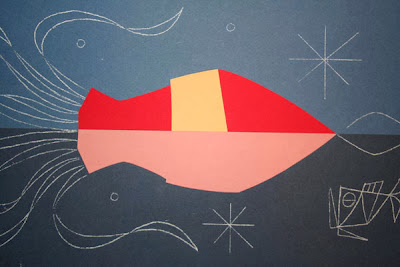 Following the same procedure, I apply another segment onto the lower part of the mantle. 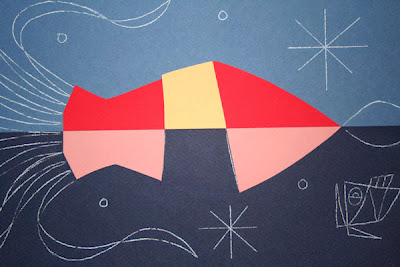 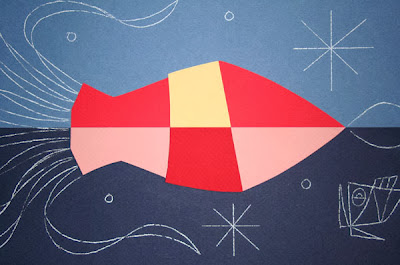 ..... and so on. Bit by bit the segments are positioned in place. I've also added the tail fin of the squid. 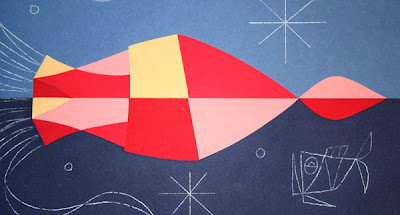 The eye of the giant squid is assembled with (semi)circles. It's almost impossible to cut out a perfect circle out of paper by hand. Therefore I prefer to use a circle cutter. However, a disadvantage of working with a paper cutter like the one pictured below, is that you'll get a small hole in the middle of the circle, similar as to when using a pair of compasses. This hole causes no difficulties as far as it concerns the eyeball itself (or sclera, using the correct scientific denomination), as the pupil will be placed on top of the sclera, covering the hole in the centre.

Assembling the pupil is a little bit more complicated. The pupil is constructed of two semicircles. Making these semicircles with the use of the circle cutter, the hole which is made by this cutter is still partly visible, even though the circles are cut in half. Therefore I cut off a tiny little slip of paper from the part of the semicircles where the hole is situated. With the hole being cut away along with the little slips of paper, I put together the two semicircles to make one whole circle. Of course this will not be a perfect circle, but that will be hardly visible. 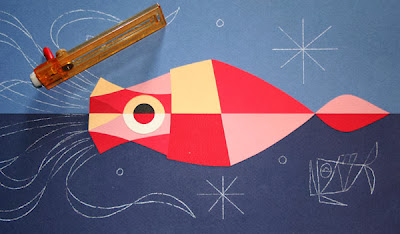 Now that the head and mantle of the squid are completed, I can start with the arms and tentacles. It's not a very complicated piece of work, but it needs to be done with a lot of accuracy. It's essential to keep focused doing this kind of work, because with all these segments of paper a mistake is easily made. It may not be complicated, but it's nevertheless a rather time consuming job to do.

I want to create a flat image. Therefore I want an empty space where the arms or tentacles of the squid cross each other, in order to take away every suggestion of depth. I guess that this vague circumscription may need a more detailed explanation. The three pictures below will probably clarify my intention much better.

In the first place I glue one segment of the squid's arm on top of of the other: 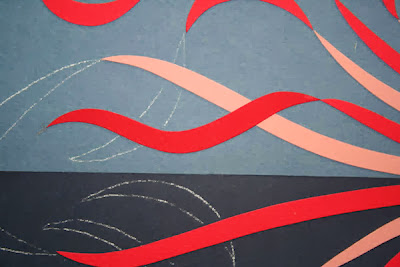 This gives the impression that one arm is in front of the other. It suggests depth, which I don't want. So I cut away that specific part of the upper segment that crosses the underlying segment with the use of a scalpel (an instrument of fine precision and therefore indispensable for this kind of work). Having done so, the result is now of course that the pink segment looks as if it's in front of the red one. But I haven't quite finished yet .... 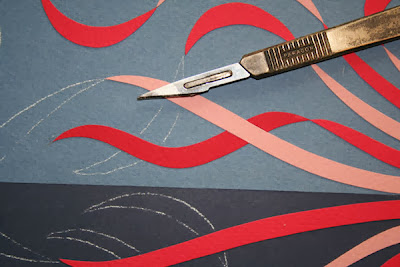 The last step will be cutting away a little piece of the pink segment, leaving an empty space where the two segments cross each other. The result of all this cutting is that neither the red or the pink segment of the squid's arms is in front (or behind for that matter) of the other one, thus taking away any illusion of depth. Besides that, it gives a nice visual effect, which is not an insignificant detail in a decorative work of art. 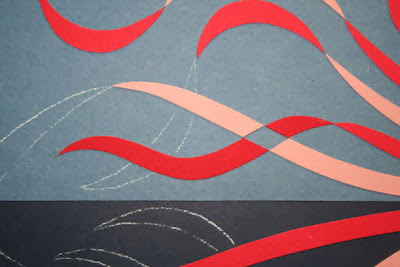 With the giant squid all finished, the paper collage is going ahead quite well!

However, all work is not done yet. I still have to construct the two deep sea fish. This is done in the same fashion as the squid's mantle and head, so an elaborate verbal manual will be somewhat redundant. A visual guideline will be quite sufficient in this case.

Last thing to do is add some dingbats for the finishing touch. After eighteen hours of work the paper collage is finally ready!

Although all work is done, the collage still needs to framed. As it's not a standard size, the frame has to be made to measure. A fine job for the frame-maker, I should say.
Some time later the framed collage is ready to collect. At home I take a last picture of my work and then it's time to bid the giant squid goodbye. It may sound a bit silly, but sometimes it's not that easy to part with your own creation, especially when it's one of a kind and you're quite pleased with the result .....